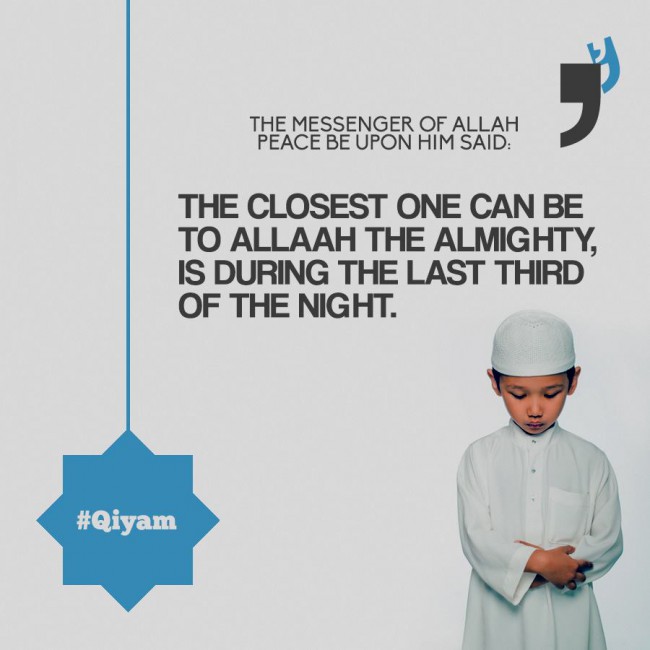 Allah SWT said: “They (the believers) forsake their beds, to invoke their Lord in fear and hope; and they spend out of what We have bestowed on them. And no soul knows what has been hidden for them of comfort for eyes as reward for what they used to do.” [Surat As-Sajdah : 16-17]

Hadith: The Prophet (peace and blessings of Allaah be upon him) said: “The best prayer after the obligatory prayer is prayer at night.” Narrated by Muslim, 1163. And he (sallallahu alaihi wa-sallam) said: “You should pray qiyaam al-layl, for it is the custom of the righteous who came before you and it brings you closer to your Lord, and expiates sins and prevents misdeeds.” Narrated by al-Tirmidhi, 3549; classed as hasan by al-Albaani in Irwa’ al-Ghaleel, 452.

He says: “Who will invoke Me, so that I may give him? Who will seek My forgiveness, so that I may forgive him.” [Saheeh al-Bukharee and Saheeh Muslim] In another report, he adds: “Then Allah extends His Hand and says: “Who wants to invest (good deeds) with the One who is not wasteful or unjust?” He continues to say this until the dawn arrives.” [Saheeh Muslim] The Messenger of Allah (sallallahu alaihi wa-sallam) saying: “There is an hour of the night which no Muslim person encounters and asks for a good thing for this life or the Hereafter, but Allah grants it to him. This happens every night.” [Saheeh Muslim] The

Most Important thing to remember is to do as much as you can and not over do it to the point where you miss out on this great prayer and the great reward in store for you. Remember this: Aaisha stated that Prophet Muhammad (Sallallahu ‘Alaihi wa Sallam) said, “The deeds which Allah loves the most are those done regularly, even if they are small.” (Bukhari & Muslim).